The Healing Journey – Abandonment to Adoption

When a large group of 12 small and very terrified dogs of various ages were blatantly abandoned in several small carry boxes at Aanifeira’s doors in 2010, for two young adult males this would prove to be a life changing passage to a new life in another country.

The two dogs in question, named by shelter staff as Bob and Marley (read here about their start), due to their long and disheveled coats, would prove to be one of the shelter’s biggest challenges.  It was obvious from the start that Bob and Marley had suffered from extreme ill-treatment as they were literally terrified of humans and any approach from staff would leaving them cringing in the corner sometimes lashing out and biting in defense!

With a grim future ahead given their nature, various volunteers and staff took it upon themselves to work in trying to socialize these little dogs.  Appeals were also made to experienced animal owners/trainers for help in their socialization or to anyone who would be willing to take them into a home environment to work closely with them. 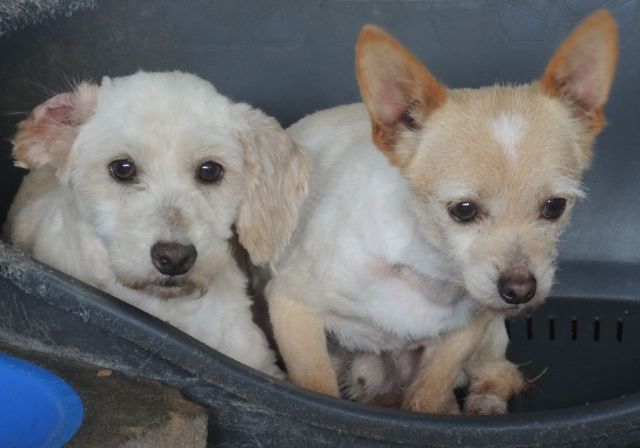 Over time some improvement in their behaviour was noticed, particularly with Bob who would approach rather than hiding however any future adoption looked very slim for these two beautiful little dogs.  Although in size they were appealing we couldn’t risk someone adopting and then returning the animals back into the shelter environment causing an even more devastating effect on these dogs.  Our greatest desire was that someone somewhere would hear of their story and come to their ‘rescue’.

Quite by chance in October 2013, we received an email from two girls Liz Wolting and Lenny, specialists in dog training and working as animal behavioural consultants in the Netherlands, asking if they could come to our shelter for one day to visit and help out!  Our answer was ‘YES’ and the girls arrived fully prepared for working with our more problematic animals.   We couldn’t believe it when Liz told us that she ran a shelter for animals specializing in rehabilitation, boarding, dog school and grooming salon called Animal’s Faith in Maastricht, Holland.

We explained our situation with Bob and Marley along with a couple of other cases and the girls immediately got to work in shifting the animals around into different boxes rather than having them all in one box as we had done in the past.  The change was dramatic for Bob & Marley as they were able to socialize with other friendlier dogs of all sizes and ages and their behaviour changed overnight!  Although there was a change we still thought that anyone who adopted them would not be experienced enough to cope and keep up this work.  Liz and Lenny ended up spending a couple of days with us to help out and leaving us with tips on how to continue with Bob and Marley’s new behavioural program.

This didn’t end here though, Liz had a soft spot for these two dogs and as progress was slow in improving their natures she agreed to adopt them and work with them in Holland! This was what we had been waiting for so the ‘boys’ were prepared and in February of 2014 they were flown to Holland to Liz’s safe keeping.

Liz has kept us continually up to date on how they have progressed and the images of their first days in Holland together with the short film showing the complete change in Bob’s nature are proof enough of her wonderful and patient work with them.

Today Marley has been adopted and Bob awaits his turn.  We are deeply grateful to Liz and Lenny for firstly choosing to contact us out of the blue with their kind offer to help us out at the shelter and finally to YOU Liz for taking the boys to Holland and healing their spirits giving them a new lease in life.  Our special thanks to you both!