Today, October 4th, is WORLD ANIMAL DAY (WAD) and for us at Aanifeira it is one of the days that always brings to light the number of animals that we rescue throughout the year and what we go through each day to ensure that each animal gets the right care and love that it deserves.  For all at the shelter, including our international veterinary volunteers, everyone gives their time unselfishly in helping and caring for these beautiful creatures and we are all proud to be able to share this day with everyone.

WAD 2014 for us had an extremely busy workload with not only our veterinary clinic working non-stop throughout the day attending the public but also a huge behind the scenes effort that went in to ensure that each animal at the shelter had treatment and was fed and exercised.  The daily routine of feeding and cleaning close to 400 dogs and 60 cats was equaled with this additional routine for the more fragile residents at the shelter:

Bottle and syringe feeding two groups of 5 abandoned kittens on a three hourly basis.  One group only around 10 days old and found abandoned in a plot of land with their eyes still closed and the other group about three weeks old dropped outside our premises this week with larvae already beginning to penetrate their tiny bodies. 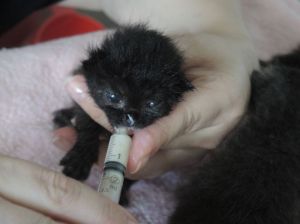 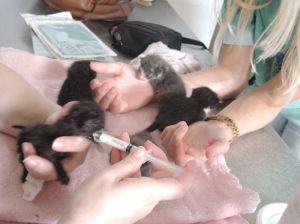 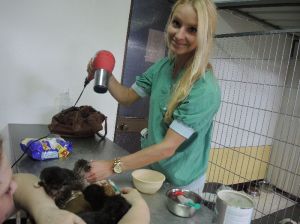 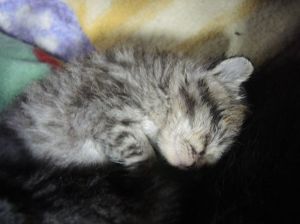 Taking in two extremely beautiful adult cats previously adopted from Aanifeira in 2010 and very sadly returned to the shelter today by one of the owners due to a marriage breakup.  It is incredibly hard to understand such rash decisions as it is always the animal that suffers in these situations.  After assessment the pair were given a clean bill of health but it was easy to see that both remained frightened and uneasy in this new environment.

Caring, with a special food program, for an emaciated Podengo (Portuguese breed – for more information read here) female dog, with a leg injury (possibly from being hit by a car), found lying under one of the shelter staff’s car this week.

Ensuring that a small abandoned dog, that walked into a travel agency in a larger town close by and which was handed into the shelter, was treated for his coat loss problem as well as being given some socialization. 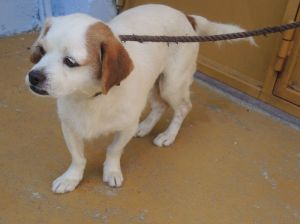 Small female puppy abandoned on a street corner right next to the shelter this week. Below with her carer Kylie, 5th year veterinary student from Holand

But with all these woes we had a ray of light today when one of our volunteers, Vanessa, arrived with a huge array of donations (cleaning products, dogs snacks, rugs, towels, feeding bottles, gifts for putting up for sale) for the shelter to celebrate WAD.  She also bought along a delicious cake helping to lift moral on such a busy day at the shelter. Vanessa is not only a volunteer but also an adoptee and she bought along her two dogs to the shelter, one of which, Lili (white one), was abandoned in an appalling state close to the shelter.  Our special thanks to her for her kindness in remembering us.   Photos below of Vanessa and her dogs and with Paulo, Aanifeira’s shelter manager. 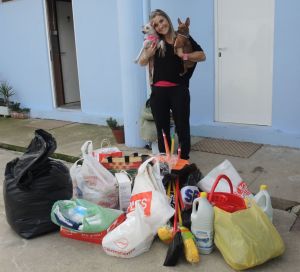 Last weekend, 27 & 28th September, as well Aanifeira participated in the annual national Animal Life WAD companion animal food campaign at the Continente chain of hypermarkets.  Two days of manning the stand from 09h00 – 23h00 and providing animal welfare awareness to local people as well as collecting donations provided the shelter with a much needed boost of food and other products for dog and cats. 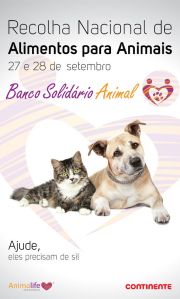 Tonight in closing WORLD ANIMAL DAY, Aanifeira has invited everyone to join them at the Bar Porta13 in Santa Maria da Feira for a celebration party.  Part of the night’s proceeds will be donated to Aanifeira in helping to provide better conditions for the abandoned animals that it takes in.  Our special thanks go out  to the Bar Porta13 for this fantastic initiative.

And finally to bring awareness to the meaning of WORLD ANIMAL DAY a fantastic step forward, that from 1st October 2014, Portugal introduced a new law enforcing the criminalization of abuse and neglect of companion animals.  Despite the limitations of the law, this is without doubt an important civilizational step for this country and follows the majority of the other EU countries in the field of animal protection.

AANIFEIRA proud to be part of WORLD ANIMAL DAY for 2014.