This is Pa a senior girl who came into the care of Aanifeira many years ago. Unfortunately we know very little of Pa’s past.  Where she came from? Was she stray? Where she was found?  Who owned her?  All a mystery.  Her soft and gentle nature however always showed through and she would spend her life peacefully living with two other dogs in her box.   When volunteers were on duty she would eagerly look forward to being exercised in the outside parks and being cuddled and groomed.   It was saddening to think that as she grew older and became a senior that she would never experience the life of having a home and owner who loved and cared for her.

One day however Pa’s luck changed.  February 2013 brought two Dutch veterinarian students called Francisa and Mirke who were studying at Gent University in Belgium, came to Aanifeira to do an internship at the clinic.   The girls came for a two week period working alongside the Aanifeira veterinarians and it was during their time with us here that they fell in love with Pa!  We however only found this out in June of this year when Francisca and Mirke wrote a beautiful note to us as follows:

Me, Francisca van der Bij, and my friend Mirke Sluiter did an internship in the beginning of February this year at Aanifeira. We loved working with the people from Aanifeira and the animals from the shelter. We also fell a little bit in love with your sweet dog Pa. After long consideration we would love to adopt her. But there are a few things we need to know about Pa before we can adopt her. How is Pa doing at the moment and is she still in the shelter? We don’t know her age which would be nice. Also we have a cat in our house and we don’t know how she reacts to cats. We live in Belgium so for transportation we were thinking about coming to Portugal by car at the end of September. Is Pa healthy enough to travel by car and is she accustomed to traveling in a car? We hope to hear from you soon and we hope that Pa and all the other animals from the shelter are doing well.

When we read this news we were ecstatic but concerned as Pa´s health had begun to deteriorate.  Although she had a strong heart she had developed arthritis and had some difficulty in faster movements.  She had become thin and was being treated for an ongoing ear infection.  All of this needed to be weighed up by Francisca and Mirke before they made their decision.  But fortunately this DID NOT deter them.  The girls had firmly made up their minds!

As promised, in September they drove from Belgium to Portugal to come and pick up Pa and take her home with them and an email received today from the girls tells all:

“We have a lot of picture’s of Pa so I just send most of them. Everything is going great with Pa. So far she has been with us to San Sebastian in Spain, to the beach in south of France, an old forest and castle in France, to the woods in Groningen in Holland, to my home town Woerden in Holland and of course in Gent in Belgium where we live. She loves going for a walk, she has gotten a lot stronger in her legs and can walk for 30-45 minutes at a normal speed now. We have been giving her puppy food so that she will put om some weight and she put on 1 kilo so far. We also went to a dermatologist to look at her ears and after intensive antibiotic treatment her ear infection is finally gone. Also the little knob she had on her chest turns out to be just a skin polyp. She has gotten a lot more active and loves to get attention from everyone around her. She is great with all of the dogs she met so far because she is such a sweetheart. Both Mirke and I love her a lot and she loves all the hugs she is getting. She also loves sleeping in her warm dog basket and sniffing around in our garden. Pa is totally worth the big to Portugal. Thanks again for all your help and everybody else at Aanifeira.”

What more can we say only that it is wonderful that some people put their hearts and souls into adopting a senior companion animal which is not always 100% healthy and they do everything in their power to provide a few years of quality life. 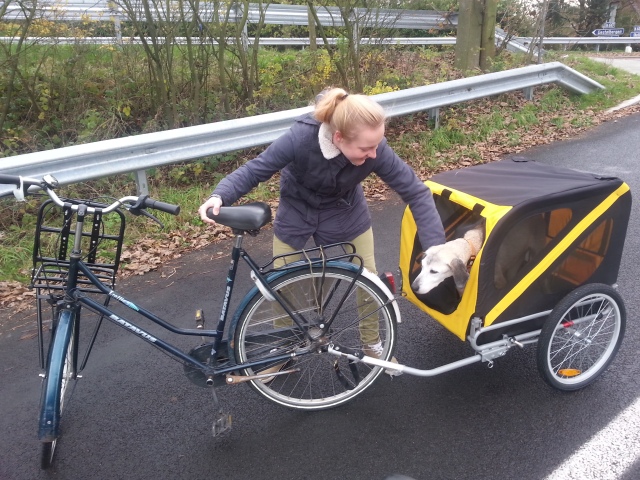 Our deepest thanks go out to Francisca and Mirke for giving our Pa a second chance in life and believing that an older dog is definitely worthwhile adopting.  The photos below tell all.  Enjoy…