A Poignant Story – Given a Final Chance in Life

This is the moving story of GAIA, a Podenga bitch used relentlessly for hunting and then  senselessly discarded after reaching a senior age to be left to die in the street.  She had a look of incomprehension and total despair in her eyes, with a body marked by abuse and a lack of food and water.

GAIA, ignored by all the human race around her, who lay down in the middle of a busy road to die.

It was at 9.00 p.m. on Sunday August 12th when I was driving with my family through the town of Fiães, Santa Maria da Feira when were came across Gaia in a shocking state lying in the middle of the road with a look of death about her.  We quickly stopped the cars and ran to pick up food from the boots of our cars (a supply of food and water is always kept in just such cases as these to feed street animals) and as we approached we realized that this case was more severe than we had ever imagined.

She was incredibly emaciated, covered in ticks and with visual signs of abuse.  We couldn’t conceal our shock and tried offering her food but to no avail and she continued to remain lying motionless on the bitumen road.  We were nervous about touching her in case she had been injured and tried to interact with her in helping her to move to the side of the road.

Whilst I stroked and talked to her, my family tried talking to people passing by on foot in an attempt to understand as to why no one had helped this poor creature.  Gaia then lifted her head looking around her in a discordant way – it would seem that she couldn’t see us.  She was guided by sounds to her ears.  How strange, I thought!  It was then that I suddenly realized that she was totally blind.

I ran to get water and a recipient for her from my car and she drank incessantly for several minutes.  We had to remove the water as her stomach began swelling causing us concern.  How could people do this, deny a blind and helpless dog food and water – how cruel!  We throw so much extra food away surely someone could have given her something.

I couldn’t turn my back on this situation even knowing that I had couldn’t foster any more dogs, but I knew that my mother had a small space at her home where we could let Gaia rest, so we gently gathered her up in our arms placing her in my car.  This would give us an opportunity of taking Gaia to the vet the next day to be checked out.  We gave her a little more water, her thirst was incredible and we feared that her internal organs may not be working properly, as well as a plate of chicken and rice and then left her to rest for the night from her exhaustion. 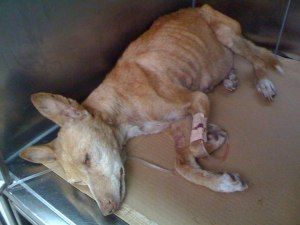 The following day Gaia was awake early at 7.00 a.m. showing us that she was a survivor, by eating another plate of food and drinking more water.  Then it was time to take her to the vet to access her situation.  I brought Gaia into the Aanifeira Veterinary clinic where vet Sara Latourette Alves was gave her a complete examination.  The bad news was that, due to her age, she had serious health problems: blindness, diabetes, mammary tumors, an advanced heart murmur, barely any teeth and a possible case of mange.   Gaia had obviously had a very difficult life without any love or care and had been senselessly discarded like trash when she no longer was of any use to the hunter.  It was time for her to know there is some love and generosity in this world and therefore in spite of all of her health problems, Aanifeira vet Sara put her on the drip and took blood samples for analysis.

When I went back and visited her on Tuesday, I found her still lying motionless in her box with a huge sadness in her eyes and I could barely contain my tears.  I reached out to touch her and she began gently licking my hand and I could see she wanted to just rest.

Although the following day was a public holiday in Portugal, I knew that Gaia was in good hands with the vet team at Aanifeira going in especially to check and treat her.  They would have rung me if her condition had worsened.

When I visited her on Thursday, I was amazed to find her standing up which was due to the insulin shots she had been receiving.  Another very good piece of news was that the results from her blood tests showed that her kidneys were fine.  In addition her heart problem was manageable with medication and scabies was ruled out as being just a symptom of lack of nutrition.  Her blindness could be overcome with confinement in a safe area where she could learn to get around and finally it would seem that despite the fact she had mammary tumors these would be watched although later on there was the possibility of them spreading. 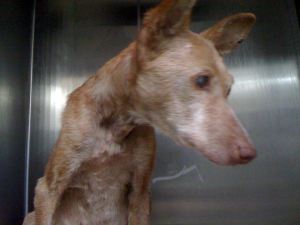 Of course we all know that Gaia will have a short life with us, but there IS LIFE!   One day we will lose her, when nothing else can be done, but we hope that she can have some happiness for the rest of her days and until this day arrives everything will be done to make this possible!   Where there is life there is hope!  Gaia needs a special person to love and take care of her for the rest of her time.  To teach love and be loved, to ensure that she has a tranquil and safe life.  She has a beautiful nature and is serene and obedient.