Get ready World Animal Day (WAD) is fast approaching on October 4th and Aanifeira is very much looking forward to once again being a part of this event in helping to draw attention to animal welfare around the world.   This year two events are being planned to celebrate this special day.

Campaign to be held over two days at the São João da Madeira Shopping Plaza, in an effort to collect food donations for shelter dogs and cats.  A goal of 750,000 meals is on the cards and Aanifeira volunteers will man the stand from 09H00 to 23H00 over these two days. 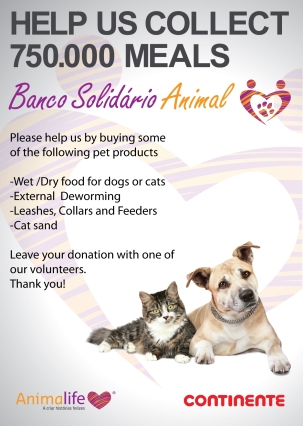 Volunteers will also interact with the public in helping them to understand the importance of animal welfare and in doing so will ask them to sign the WAD ‘Pledge’.

Members bringing their dogs and cats in for treament to the Aanifeira Veterinary Clinic, will be asked to sign the WAD ‘pledge’ and as a surprise will receive a special certificate confirming their pledge to this cause.  In addition the shelter will be open to the public to visit for them to get an inside view of how it is run.

Both events will be publicized on Facebook and a good turnout is expected.