Last Sunday, Aanifeira was very privileged to receive, for the second time running, the Buddhist master and  representative of the Dalai Lama, Tulku Pema Wangyal Rinpoche. 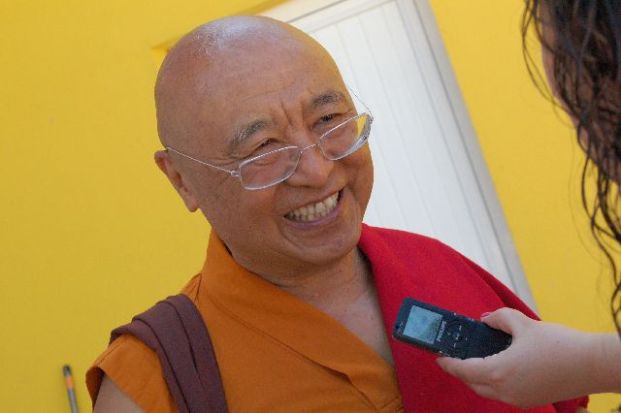 As a vegetarian and advocate of non-violence, especially towards animals, Tulka Pema Wangtyal Rinpoche made his first visit to Aanifeira back in 2008 when there was a huge amount of work still needing to be done.  At the time, Aanifeira President, Victor Barros, commented saying that the visit of the Tibetan master was “very important” and that “his blessing would help us take this project forward and achieve our mission.  I believed in him and appreciate the vote of confidence that he placed on us”.

Walking through the shelter last weekend with Victor Barros, Tulka Pema Wangtyal Rinpoche was able to see, up close, the work that has been carried out over the past four years in the defence and protection of animal rights.  Tulku Pema Wangyal Rinpoche said in an interview with SMF TV, that animals deserve  “the same love and tenderness that humans do.  I am very happy when I see people take care of the animals as if they were their own family”.  He thanked all, “from his heart”, for the work that Aanifeira volunteers have done for the animals: “I have been here before and I am very pleased with what has been achieved in recent years.  Aanifeira’s facilities have greatly improved from what they were before and the work being done is excellent”.  The master explained that he had recently met with the Dalai Lama and told him of his first visit to Aanifeira and intention to return. According to Tulku Pema Wangyal Rinpoche, the Dalai Lama, asked him to thank one and all for the help they give to animals. 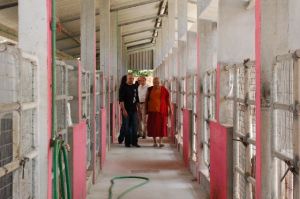 Prior to his leaving, the master made a very generous monetary donation to Aanifeira and in a touching ceremony and gesture offered a white scarf, called a kata, to President and Vice President, Victor Barros and Conceição Quaresma.  It is an ancient Tibetan custom to bring an offering when visiting a special place and the colour symbolizes purity of intention and aspiration.  The master also tied a red string, the protection and blessing cord, around each of their wrists offering a short pray over it and then blew the power of his mantra onto it. 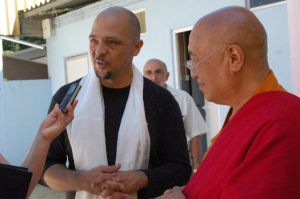 Tulku Pema Wangyal Rinpoche was born in Tibet and was recognized by several Tibetan masters, as the reincarnation of Taklung Tsetsul Rinpoche, leader of the Kagyu Tradition Taklung.  As a child he studied with some of the most eminent Buddhist teachers, which includes the Dalai Lama.  In 1975, on one of his trips to Europe, Tulku Pema Wangyal Rinpoche decided to found the Centre d’Etudes de Chanteloube in Dordogne, France, to encourage the study of Tibetan Buddhism and the preservation of Tibetan culture and philosophy.  He currently lives in France where he has been teaching for over thirty years.