Saving Four Lives at Once

My work often takes me into the Douro valley, east of Porto, where Port wine is made and whilst on my way home last week, driving through the fairly remote mountain region, I spotted a small cream coloured dog wandering aimlessly along the side of the road and then walking straight into the path of three huge oncoming trucks.  I jumped out of the car and held my hand high for the first truck driver to stop and fortunately he did!  Then came the quick decision that I had to pick up this animal otherwise it would have meant a sure death.  As she appeared a little nervous and hesitant at first, it took a few minutes to coax her close to me until I could finally scoop her up in my arms before any more traffic appeared. 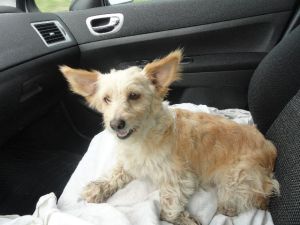 What I found in my arms was a beautiful little long-haired, lactating, podenga who had quite obviously recently given birth to pups.  My heart went out to her as I am a huge fan of podengos (read here for more on the Portuguese podengo) and I wondered if I had made the right decision to pick her up but with the fact that she appeared lost and not within her own territory lead me to believe that her pups had met with some misfortune and that she had been discarded!  I walked over to a small house not far from where she was and managed to call the house owner who said that he hadn’t seen her before and that this sadly was commonplace in this area where he lived.  We both sadly lamented the fact that this is a growing problem in Portugal and so I took the decision to rescue this little dog and bring to Porto with me in my car.

From the moment I put her in the car on the front seat beside me where I could talk to her and stroke her head, she warmed to me immediately and proved to have a quite character.  She immediately decided that she would much prefer to travel down with her two front paws parked on the dashboard in front of her and the rest of her little body standing on the seat!  So for the next hour and half or so I had the pleasure of her company staring out at the road ahead through the front window observing all going on around us.

It was quite obvious that this little dog was fretting and missing her pups so I quickly drove straight to Aanifeira for her to be checked out.  On my arrival I could hardly believe the news when Paulo told me that Aanifeira member, Ana Rita, had come in just that morning with three tiny puppies, still with their eyes closed, that she had found in the trash can near her home that previous night and that she was desperately trying to find a surrogate mother!  It seemed like all our prayers had been answered to save four lives at one go!  We immediately contacted Ana Rita and the following day she brought in the puppies to try to see if they would be accepted.  To our delight, after some perseverance, our little podenga (now baptized Bia) adopted her new family and we are happy to report that mother and pups are doing just fine! 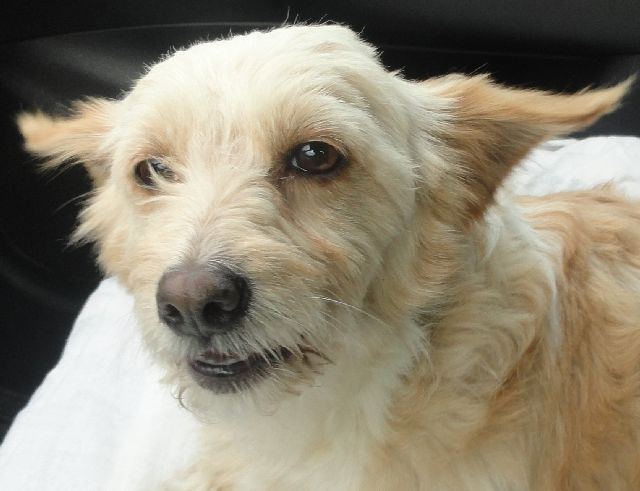