Sixteen New Faces on the Block

It was a bittersweet Saturday at Aanifeira last Saturday when I arrived to see lots of new little faces peeking out from various parts of the shelter.  Sweet in the sense that we had rescued many new animals from the local pound and bitter due to the fact that two puppies of around 4 months old had been abandoned in bad shape at Aanifeira’s front gate along with another adoptee making a last minute decision to ‘dispose’ of their family pet before leaving the country the next day.

Mum, Daisy and her seven pups rescued from the pound.  Daisy was extremely thin and in poor shape and her puppies are just beautiful.

Litter of six beautiful puppies of around 2 ½ months old, rescued from local dog pound.  All females from two separate litters.

Housed in the 3rd Corridor

Mary-Lou, young adult dog previously adopted from Aanifeira and abruptly returned one night at 8.00 p.m. last week when her owners gave the rather lame excuse that they were leaving the country to live aboard the following day! 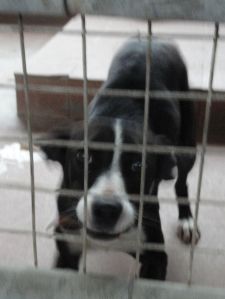 Otta, found wandering last week in the street in front of Aanifeira one morning when staff arrived for work.  She had obviously suffered serious malnutrition as she walked on her Metacarpus (bone of the paw of the foreleg between the carpus and the phalanges) and Metartasus (paw bone between the heel and the phalanges) and has a skin problem.  She is now having special baths to treat her mange as well as being given a special high vitamin food to recuperate from her malnutrition. 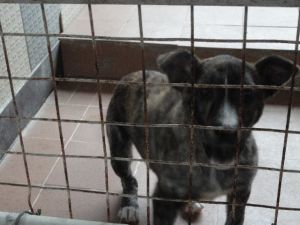 Nikos, puppy of around 4 months of age, abandoned on the Saturday morning just before I had arrived.  Covered in fleas and ticks, he was quickly treated as well as dewormed.  Our current Greek vet intern Nektaria baptized him with a Greek name Nikos.

We will ensure that all of these beautiful animals are properly treated and cared for until they have reached good health.  From there they follow through to our formal adoption process.