It was back in November of last year when Aanifeira President, Victor, made a chance visit to the local pound and came across an extremely thin and emaciated mother dog who had recently given birth to nine puppies.

Not able to turn his back on this situation and knowing full well that she and her puppies would have very little chance of survival in the state they were in, he made a snap decision to remove her and her family from the pound that day!   With paperwork over he quickly got the family into his small van and carefully drove them back to Aanifeira.

Shine, as she was quickly baptized and her puppies were greeted by staff on her arrival and were placed in a large and spacious box with a protective indoor kennel where blankets were laid and food put down and it was from this day forward that this little family totally flourished.  When the puppies reached around 8 weeks old they were weaned and put up for adoption (see one of them left) proving hugely successful.

Shine blossomed over the following weeks, gaining weight to turn into a beautiful dog.  She was spayed by Aanifeira vets under the Humane Society’s World Spay Day campaign but in January was found to have vaginal cancer which we found distressing but Aanifeira vets, Claudia and Joana persevered and Shine was bought indoors to the clinic infirmary and chemotherapy was started.  Over this period she was totally pampered by many of our international vet interns who passed through the clinic and they played an important role in helping us not only with her treatment but with the day to day duties with her.  She responded well to her treatment and her condition improved. 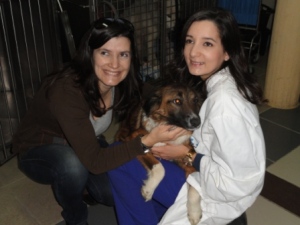 During her time in the infirmary, Shine showed outstanding intelligence when taught commands by vets Joana and Claudia, picking up everything  extremely quickly!  It was whilst she was in the infirmary and having her treatment that vet intern Eva Claeyé from Gent University in Belgium, came to do a two week voluntary job at the clinic and much to our delight, fell totally in love with Shine deciding to adopt her.

Unfortunately Eva couldn’t take her back on the plane with her because she was travelling on a low-cost airline that did not accept animals in the hold but undeterred she kept her promise and sent a very nice Dutch couple to pick her up and take her to Lisbon to catch a flight to Amsterdam.  At Schiphol airport, just over two weeks ago, Eva was finally reunited with Shine (now called Flo) and took her to Belgium to start a new life!   Our deepest thanks go out to Eva for being so caring and persevering in sending for this beautiful dog.  We are so grateful to you. 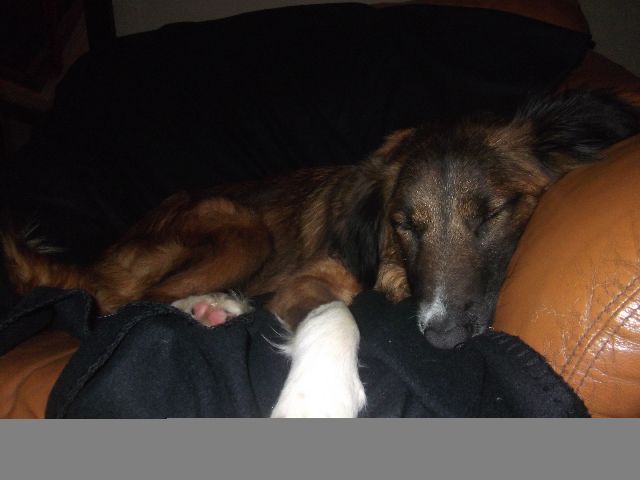 Asleep on the sofa in Belgium after her long journey