Last Saturday started out like any other Saturday at Aanifeira, with the usual run of visitors wanting to visit the shelter plus a large number of owners with pets waiting for their appointment to see the vet.  In addition, we were delighted to see Sara, Percival’s (see Percival’s story here) fosterer’s mother, drop in to pick him up to surprise her daughter Beatriz that moring.   Percival of course was ecstatic to be going out for the day!

Then, during the quiet lunch hour on this warm and sunny day, volunteer Andreia came into the shelter leading a small and frightened dog in the most terrible state.  The animal had the most enormous dreadlocks that any of us had ever seen with prickles caught up in them around the tail area.  We immediately noticed also, a strong odour of rotting flesh coming from the animal as well.   Underneath this mess however, we saw a bright-eyed little dog with head held high and a huge will to live! 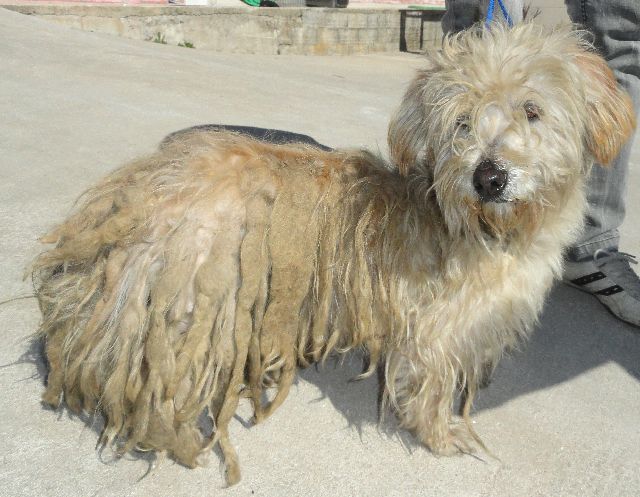 Andreia had found this poor creature walking along one of the main roads connecting Lisbon to Porto and as he was extremely frightened, she had a difficult task in trying to coax him into her car.  She was faced with running after him on the busy road whilst dodging in between moving cars with disgruntled drivers yelling at her to get out of the way!

We were fortunate enough to have the help of two Dutch volunteer vets Nienke & Judith (from Utrecht University in Holland) and since our in-house vet, Claudia had to attend to the public during the afternoon, she gave the girls instructions on the procedure for cleaning up this poor animal.

General Manager, Paulo (our expert dog clipper) also pitched in and after Judith sedated the dog, and now baptized Jasper (pronounced “Yasper” in Dutch) by our Dutch vets, everyone got down to their job of cleaning him up.

As Paulo began clipping around the neck area, a darker scenario became more apparent when we discovered that the rotting flesh smell was from a gaping neck wound which we believe must have originated from a tight collar.   After about 20 minutes of clipping and cleaning up, little Jasper finally dropped his horrendous ‘dreadlock blanket’ and although sedated, one could finally see a beautiful little creature who had been seriously mistreated.

After defleaing and treating his wounds, he was placed in a warm cage to awaken from the sedation.   We cannot understand how this animal had obviously been out on the streets in this state and that no one had made the slightest effort to take him in and help him.

Jasper will now be nursed back to health at Aanifeira and then put up for adoption where we will ensure that he doesn’t face this scenario ever again in his life!  Well done to our volunteer Andreia (Aanifeira’s photographer) for persevering and picking him up!

See below photos of everyone pitching in to clean up Jasper.