At the last International Animal Welfare Conference (ICAWC) held in Latvia in October 2011, Aanifeira’s President, Victor Barros was there to proudly receive the ‘Top of the Class’ award from Dogs Trust.

Victor and I had attended the Dogs Trust International Training Programme in March 2010 and our vet Claudia had attended the June 2010 programme.  The courses covered a wide variety of subjects on animal rescue, animal health and behaviour and as well shelter management in general.  At the close of the course, all delegates were asked to submit projects based on what they had learnt.  Delegates were given 6 months to submit their work, but this for us was a very short period of time as being a non-profit shelter things are done quite slowly depending on funding and volunteer work available at the time.  Fortunately Dogs Trust very kindly gave everyone an extension for submission of their projects and we were able to put ours forward in February 2011. 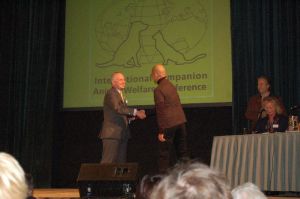 We were delighted to receive news from Dogs Trust in September of last year that Aanifeira had been nominated as one of the shelters chosen to receive their ‘Top of the Class’ Award.  Victor went to Riga in Latvia to receive the prize and we are extremely grateful to Dogs Trust for having given us this opportunity.  This is yet again another step forward in Aanifeira’s work in improving conditions at the shelter where in 2006 close to 800 animals were housed in appalling conditions!

New projects for 2012 are already underway, e.g. extension of kennels in the main pavilion to allow animals to have an outside area connected to their closed in kennel area and as well to build a cattery to house the cats that are continually being found on streets or dumped at our door.    Our job is not over and this year looks like it will mean a lot of hard work but we look forward to it with eagerness in strengthening our position as a non-profit/no-kill shelter working to help abandoned animals in Portugal. 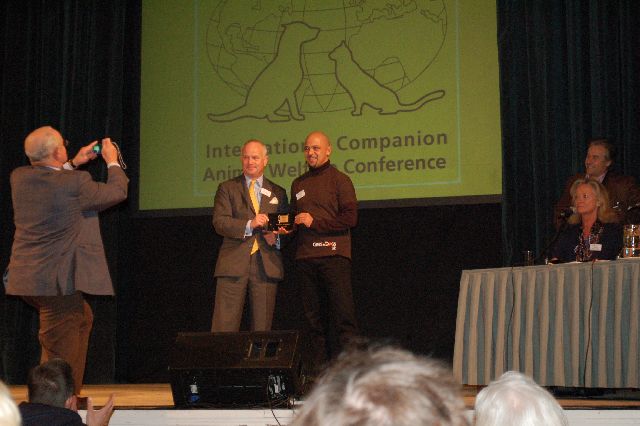