This is Percival and he’s just one happy dog!  Percival is one of Aanifeira’s luckier dogs in that he has a special fosterer called Beatriz who comes with her mother Sara, every Saturday morning at around 10H00 to Aanifeira to collect him and take him out for the day.

Beatriz is an exemplary young fosterer who is committed to coming to Aanifeira every weekend bringing her own collar and leash for Percival.  Usually one of the volunteers or staff will collect him from his box and bring him to her and the excitement that he shows when he sees Beatriz and Sara is unbelievable as he just knows he’s off for the entire day!

They take him to the park, to their home and to Beatriz’s grandmother’s home where Percival behaves like the perfect little gentleman to ensure that he gets his treat!  During the time that he is with them, he is unconditionally groomed and pampered.  They bring him back during the afternoon and it is very hard for them all to say goodbye to him when he is returned to his box. 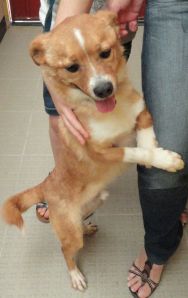 Not much is known about little Percival’s history, only that he has been at the shelter for a few years now and is around 6 years old.  He has a wonderfully friendly nature and adores children and people in general.

We hope that one day Beatriz and Sara may be able to officially adopt him but until then Percival and Beatriz wait patiently for every Saturday when they can finally see eachother and enjoy one another’s company.

Our thanks to Beatriz and Sara for allowing little Percival an opportunity of enjoying some time outside Aanifeira.

Percival ready for his day's outing