My few memories of the first years of my life are only that they was very monotonous and difficult, living chained up outside, fed on scraps and with very little protection against the weather.  One day however, I heard a lot of noise and someone came and removed the chain, hurriedly picking me up and putting me in the boot of their car.  We seemed to drive for quite some time and I was getting really hot and stuffy as little air seemed to be getting in.   All of a sudden the car stopped, the boot was opened and I was quickly lifted out and dumped by the side of the road!   I was so upset as I had no idea where I was or why this had been done to me and as the car drove off at top speed, I ran and ran desperately after it, but to no avail as it went quickly out of sight!

Me and my fellow cellmates. I'm the CUTE one in the front!

I was panting so much so had to stop and catch my breath and as soon as I did, I heard a lot of barking in the distance so started walking towards the noise.   Suddenly, I saw a big gate opening and some people coming out gently calling me to come to them, so I followed them in through the gate.

It was here that my life began at Aanifeira in a pen with some other friendly cellmates and as I am an easy going ‘kinda guy’, I got on with them really well.  I was named Santo and fed and watered regularly, my pen was kept clean and I was happy with my life there.  I would remain here for some years. 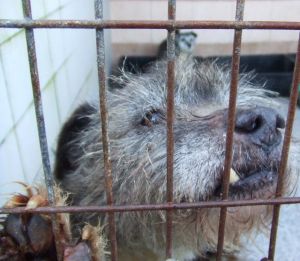 A few days ago though my life changed completely, once again I was picked up by some people but I sensed a kindness in them as they carefully took me away.  I quickly said my goodbyes to my fellow kennel mates and we travelled by car and then by plane always in a special transport box – my destination was Germany!  All of this was very exciting and new to me and when I reached this very busy place I was greeted by some lovely people who patted and hugged me an awful lot.

Once again I had to travel by car but this time I was in the front seat, with a seatbelt (can you beat that!) and sitting next to the driver – what fun looking out at all the sights! As we drove along, I had a wonderful feeling that I was finally finding my happiness!   We drove up to a house and I was greeted by a lady who immediately picked me up and showered me with kisses and hugs!  I was ecstatic about her – she was so warm and kind.  I was taken inside the house and shown around including where I would sleep and where my food and water was.  Everything looked so nice.  I couldn’t stop thinking how lucky I was and that I finally found my forever soulmate.

2 Responses to My Forever Soulmate