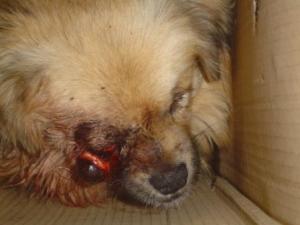 Flash, when he was found

Aanifeira faces a daily uphill battle with the abandonment of animals at its doors.  One case in particular which we shall never forget was when one morning in the late autumn of 2009, Aanifeira General Manager, Paulo arrived at the shelter to find an oblong cardboard box at the entrance.  Thinking it was just some rubbish that someone had left behind, he went to pick it up to put it in the bin when, to his disbelief, he saw a little beige woolly coated dog sitting inside with a severely damaged right eye.

Naturally he quickly carried the box inside to the clinic area and gently lifted the little creature out of it placing it on the examination table.  He found that this was a male dog and from what he could see of the eye, it was literally hanging from the eye socket by a small piece of flesh!   In addition, the dog’s left eye was closed up, meaning that he must have been operated on earlier in his life and therefore was totally blind in that eye.

On the examination table

In an incredible scenario, one eye hanging out (to this day we don’t know how this happened) and the other blind only meant that this dear little dog would spend the rest of his life in total darkness.  As other staff members began arriving at work in the meantime, all voiced their incredulity at what they saw.  Aanifeira veterinarian Claudia also couldn’t believe her eyes and quickly got down to making a detailed examination of the situation.

Quickly baptized Flash, Claudia operated on the eye as soon as she could but as it had been out of the socket for what was thought to be over 24 hours there was very little chance of saving it and Flash would never see again. 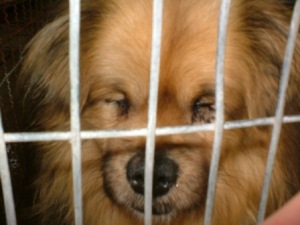 Flash’s new life of darkness took awhile for him to adjust to and what with bumping into things from time to time seemed to prove quite difficult for him.  He was placed in a kenneled area on his own close to where staff and volunteers regularly passed so that he had regular contact with humans.  His kennel and exercise area were also adjacent to other boxes so he also had regular dog neighbours.  Volunteers were always on hand to take him out and teach him how to walk on a leash in the street.

Adoptions of disabled dogs is almost unheard of in Portugal and we were extremely concerned at his dim future living in a closed kenneled area for the rest of his life at Aanifeira.   As time went by, we noticed that he was getting very frustrated living this way and although we had put him up for adoption in Portugal no one showed an interest in him.  We also decided to put him up on the Animal Medical Care Foundation site where shelters with animals having special needs can apply for financial support often leading to people interested in adopting these animals.

It was not long before our prayers were answered and we received a request from a family in France wanting to adopt Flash!  We were over the hill….  a chance had finally come for him.   Paperwork was quickly attended to and all was prepared for Flash to fly unaccompanied in the hold of the plane to Paris where he would be met by his new owner.

Victor was on duty for this task and at the end of March 2010, he delivered Flash to the airport with all his documents in time for his flight and made sure that all was in order for him to go. 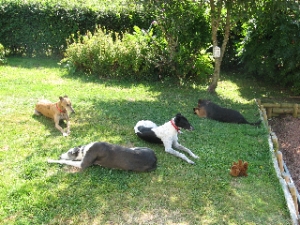 Our nervousness could hardly be contained waiting to hear if all had gone well and first reports back from Paris after his arrival said that he was travelling by car to his new home snuggled up on his new owner’s lap!  He would look forward to enjoying a new life with four other rescued dogs, three greyhounds and one mixed breed plus a very large garden where he could wander freely and enjoy life.  Not to mention his caring human family! 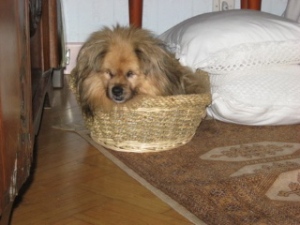 Tucked up in bed

On arrival at his new home he was a little in awe especially meeting and getting to know his new dog family and on the first night no one got much sleep but for the first time this small and defenseless dog had a family who loved him and would care for him forever.  With a new home and new life meant a new name and Flash became Sunny and long regular walks and relaxed snoozes in the garden became a daily routine as though he had been part of the family for years.

Our deepest thanks go out to the Animal Medical Care Foundation (based in Holland and who do a wonderful job in providing medical aid to animal shelters around the world) for allowing us to put Sunny up on their site and to his wonderful new owners for falling in love with a little blind dog 3.000 kms away and doing everything in their power to adopt him.

See more photos below of Sunny’s life from when he was first found at Aanifeira to his life today living in France.

Flash, when he was found

On the examination table

Tucked up in bed

Aanifeira – Associação dos Amigos dos Animais de Santa Maria da Feira is a non-profit/ no-kill organization with around 400 abandoned dogs and a small amount of cats in its care.
View all posts by Aanifeira →
This entry was posted in Disabled Animals and tagged Animal Rescue. Bookmark the permalink.