On a crisp and sunny morning at the end of January, two Aanifeira volunteer vets were taking two shelter dogs for a walk in the vicinity of Aanifeira when they heard soft whimpering coming from the long grass by the side of the road.

When they went to investigate where the noise was coming from they came across 4 tiny cream coloured pups lying together in the grass.  The girls quickly picked up the pups and bought them into the Aanifeira clinic to show Claudia the vet.  It was obvious from the start that they had been cruelly taken from their mother well before their weaning time which was estimated to be under 2 weeks.

So tiny, eyes barely open we couldn’t believe how lucky these little ones were to have been found and especially by an association working in animal protection.  If they had not been found that day they would have died of exposure during the night as temperatures fall to around 5º C.

Aanifeira’s General Manager, Paulo, quickly got down to preparing bottles and special formula milk and with plenty of hands to help so started an adventure in hand rearing this tiny family of two males and two females.

Pinky in her earlier days

From the start, Paulo took this litter of tiny souls under his wing, taking them home each evening after work where he spent sleepless nights devotedly bottle feeding them and bringing them back into work the following day.  His young 3 year old daughter Leonor, who cannot resist any animal, chose their names – Afonso and Gordo (fat one) for the males and Pinky (with a touch of Pink on her nose) and Francisca who was the tinest.

With Paulo’s special care and attention, the four tiny pups who promised to very small in stature when fully grown, gradually grew into a group of beautiful strong and playful puppies.  It was Pinky however who became Paulo and his family’s firm favourite with Leonor constantly asking him to bring her home even after they were back at the shelter ready for adoption.

Paulo decided to adopt Pinky and now that she was playful and running around he took her home to see if this would work with his family of three cats.  Things didn’t go as planned as Pinky is around the size of his cats or even smaller and they seriously clashed with her.   To avoid any further upsets he regretfully decided that this adoption wouldn’t work and made the difficult decision to put Pinky up for adoption. 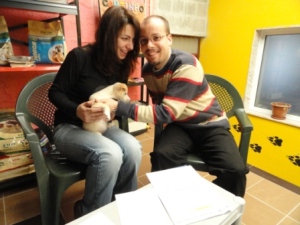 Pinky and her new owners

It didn’t take long for Pinky’s brothers and sister to get adopted and Pinky’s plight to find the perfect owners finally came when one day a delightful young couple arrived at Aanifeira looking for a pet.  It was love at first sight when they saw her and without any hesitation they said YES!   For Paulo it was bittersweet but he knew this was best and when it came to say goodbye to her we could all see the sadness in his eyes.

Pinky’s new owners became members of Aanifeira’s that day and will be bringing her into the clinic for veterinary care so happily he will be able to closely follow her progress.

Aanifeira – Associação dos Amigos dos Animais de Santa Maria da Feira is a non-profit/ no-kill organization with around 400 abandoned dogs and a small amount of cats in its care.
View all posts by Aanifeira →
This entry was posted in Special Stories and tagged Animal Rescue. Bookmark the permalink.
%d bloggers like this: