I would like to share with you a special story of taking 8 rescued disabled dogs from Aanifeira to Germany for re-homing.  Due to the difficulty in homing disabled dogs in Portugal, the purpose of this trip was to take our disabled dogs to new homes that had been specially organized for them in Germany.

The group consisted of a 5 year old blind Dalmatian called Buddy who had been in our association for about 2 years after being found abandoned at our front gates in an emaciated state and with an inguinal hernia.  Another small blind dog called Taveirinha as well as a partially blind dog called Bono both long time residents at Aanifeira. 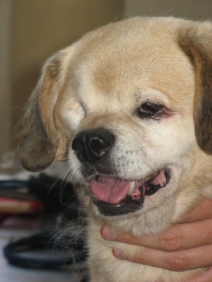 Three very small and frightened female dogs that had been part of a large group abandonment of 12 dogs one night at the doors of the shelter.  Scala, also blind and originally from Aanifeira, but who was in foster care.  Brica, a beautiful dog that had been abandoned at a factory close by to Aanifeira and was being fed by a local resident.  Sadly Brica was hit by car and not treated immediately and when the resident eventually bought her in to our clinic it was discovered that she had a very serious fractured bone in her leg.  Our vet Claudia had to make the very difficult decision of amputating her front left leg.

All health needs for each animal including passports were organized by Claudia and finally the big day came.  After a sleepless night wondering just how would this trip go taking all these animals on a plane, a million questions ran through my mind:  would check-in be easy, would they be calm, pray there are no delays etc.  I arrived at the airport with a good 2 hours prior to check-in to await my friend Constança’s arrival with all the Aanifeira dogs.  Constança, who has done this trip several times before, was an old hand at this and after an anxious and what seemed like a never ending wait at the departure area finally a large white van came around the corner with Victor (Aanifeira’s President) driving and Constança sitting beside him.   The doors of the van were quickly opened and there were the three large transport cages containing all the dogs.    We quickly got them unloaded onto baggage trolleys and after Victor said his tearful goodbyes to all our beloved residents, Constança and I made our way into the check-in area. 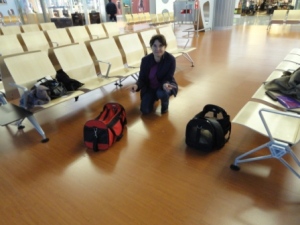 Constança with the girls ready in their carry bags

After a smooth check-in, Constança and I chose the two dogs that we would carry with us in the cabin of Air Berlin whilst the balance of six animals would travel below in the hold.  Constança took Taveirinha and I took one of the small frightened females, Lili and both girls remained calm and well behaved. 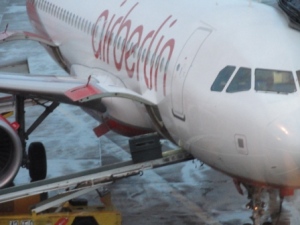 Our first flight sector would take us from Porto to Palma de Majorca however our flight was delayed for around one hour.  It eventually arrived and as the passengers disembarked at the front of the plane, Constança and I watched tearfully through the big glass airport lounge windows as all of the three large transport cages were carefully loaded onto a conveyor belt to be moved into the hold.  Although we were a distance away, we were able to indentify each of the transport cages and things seemed calm but our hearts went out to these creatures who had such a long and arduous journey ahead of them.  Finally we got our call to board and we were away!  After a quick and uneventful flight of around 2 hours to Palma our Air Berlin connection onto Stuttgart was waiting but with already an hour’s delay our fears were that there wouldn’t be enough time to transfer all the dogs to the next flight.   Fortunately after checking with ground staff as we boarded we were assured that all had been successfully transferred.

From Palma to Stuttgart, the flight was longer and full of Spaniards and Germans but all went smoothly.  Our small cabin passengers in their carry bags remained quiet throughout the journey.  On arrival in Stuttgart in the very late hours of the night whilst waiting for our baggage and our dogs, we encountered other dog owners also waiting for their pets to be unloaded from the plane.  Conversations were struck up and everyone shared a same interest so that when pets arrived everyone was keen to have a look at each other’s animals.

At last our dogs were pushed out by airport staff into the baggage area and we quickly loaded them onto baggage trolleys to walk through to the arrival area where our friends were eagerly waiting to greet to us along with future new owners and fosterers who were taking some of the animals. 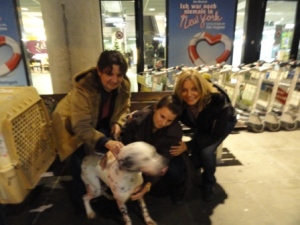 Buddy was greeted by a wonderful young lady called Desirée and her friend who immediately took him out of his transporter and sat with him in the icy cold air stroking and cuddling him saying how incredibly grateful they were to have the privilege of having him!   It brought tears to my eyes to see how much they fell in love with him on sight and I knew that he would be in good hands.  Buddy had an even longer journey still to come that night as Desirée and her friend were taking him to Dusseldorf – a three hour drive from Stuttgart.  Desirée was taking him to the best animal veterinary hospital in Dusseldorf to have his eyes checked to see if anything could be done for him.   We believe that Buddy was blind from birth through a genetic birth defect.

I watched as the girls took Buddy off with them and how carefully they showed him the way through the snow over to the car park to their 4WD.  I felt a huge sense of relief as our Buddy had become very stressed over the past few months whilst living at the shelter and it was a priority to have him adopted as soon as possible.

The three very frightened little girls, baptized Rosie, Daisy and Lilly, by Paulo our General Manager, were met by a delightful couple who wanted to give these girls a new home altogether.   They also were in for a long journey to Dusseldorf to their new home.  We had tearful goodbyes to these beautiful animals and deep in our hearts, although we knew we would never see these wonderful creatures again, they were in good hands for the rest of their lives. 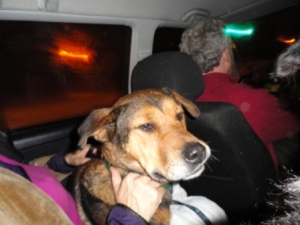 Brica, Scala, Bono and Taveirinha all came with us in the car.  Brica lay in Constança’s lap with Scala on mine and Bono and Taveirinha travelled with our friend in the front seat.  We finally reached our destination and quickly settled the dogs in.

Brica’s new owner however was coming from Frankfurt to pick her up that night and he arrived at around 1.30 a.m. in the morning to collect her.  She reluctantly went with him and my heart went out to her but I knew it was for the best.   Photos were sent afterwards to us and she has settled in perfectly into her new home and family.

Brica with her new owner 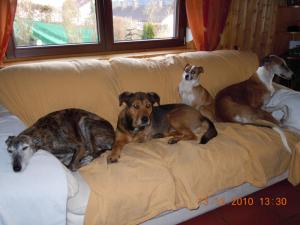 Brica with her new family

After a tiring day we finally got to bed but there was more the next day as it was Scala, Bono and Taveirinha’s turn to go to their new home north of Zurich in Switzerland.  Our friend’s husband set off the next day with the three animals securely set in their transport cages.   He took around a day to do this trip and the lady who adopted these 3 blind dogs had been waiting anxiously for them.

Constança and I flew back to Porto with a huge sense of relief that these 8 animals were in good hands and would have the loving care and attention that they so badly needed.  Our deepest thanks go out to all those people who rescued these animals when their needs were so great, to those all along the way who treated, cared and shared their love with them and finally to those who so kindly gave them a home for the rest of the lives.  We cannot thank you enough!